Shiera said:
hey I think its from @Rosie Mystica. Someone asked her about Yaya's next projects and this is a screenshot of the conversation.
View attachment 6666

I think shes a Thai fan who speaks english. Her translations of Yaya's news are really good. She also seems to be knowledgeable about Yaya's schedule.
Click to expand...

Yes! That's where I read it from~ Thank you very much ^^

YadechTaemint said:
Yes! That's where I read it from~ Thank you very much ^^
Click to expand...

According to that fan, Yaya will be filming both Lai Kinnaree and Plick Fah right after Nakee2 wraps up and before this lakorn. This was surprising to me because she was announced to be in this lakorn before she was cast in Lai Kinnaree

In either case, I'm sooo freaking excited for those 3 lakorns .. probably even more than the Crown Princess even though I adore her chemistry with Nadech.

YadechTaemint said:
I think I read somewhere on Twitter a while ago that it may be Klin Kasalong where Yaya would play twins in the past life? If so HECK YEAHHH! That would be an amazing role & a real challenge for Yaya so I really want her to do it as the experience would help her. (I'll post the link of where I read it on twitter when I remember where I read it from)

Yaya is growing up & evolving into an amazing actress, it really brings tears to my eyes I rewatched parts of Kularb Rai Narm and Kluen Cheewit yesterday & I can really tell how much she has improved
Click to expand...

Yes! They will play in Klin Kasalong... I really can't wait for this drama because it's a new script and I believe the story is really good. 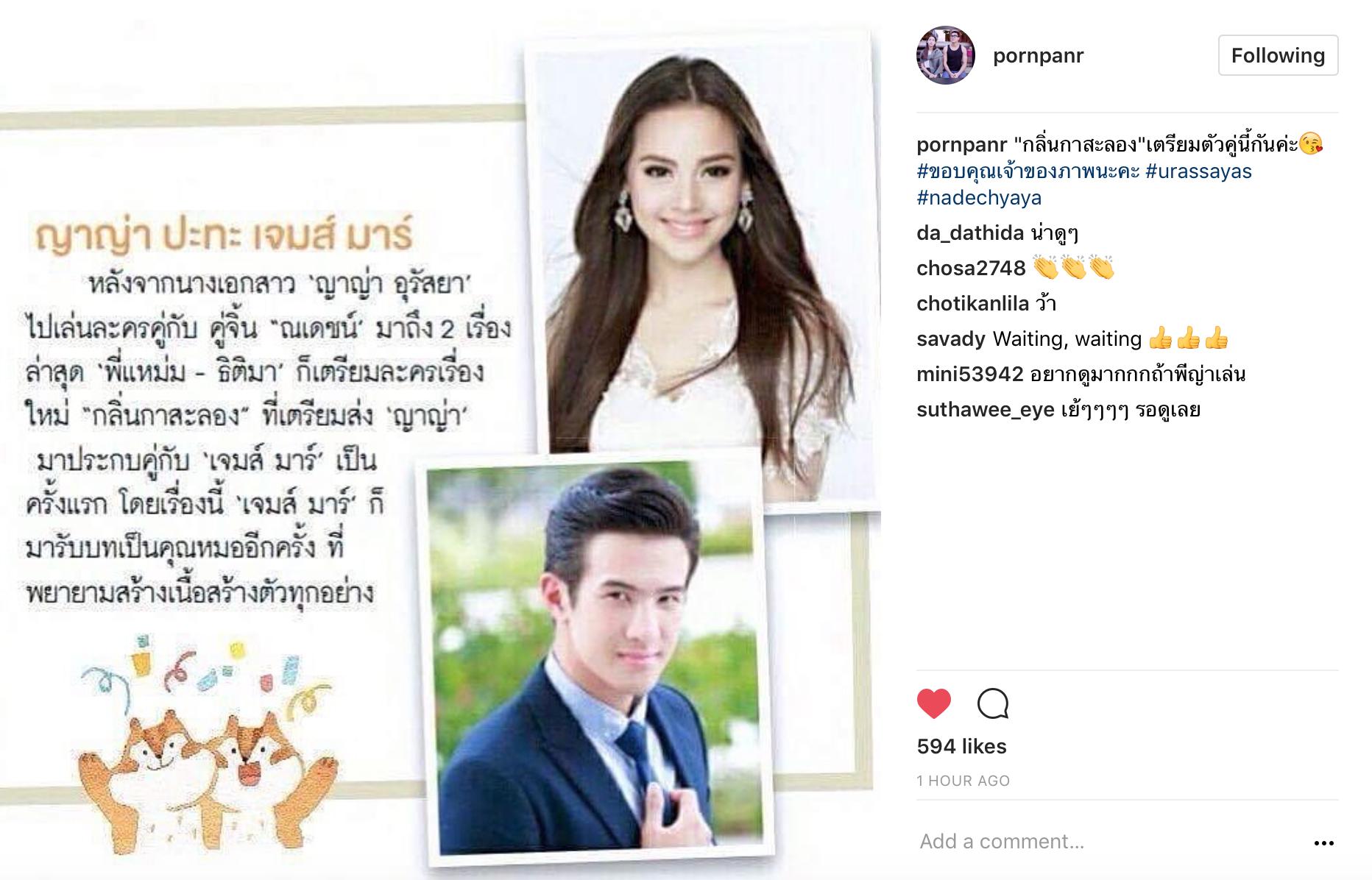 I'm genuinely really looking forward to this pairing, just wondering how is No Problem as a production house ? Are they one of the better ones Channel 3 has ?.

Me too, I'm really looking forward to this pairing! I have never seen James in any of his previous works before, so I don't really know how good he is. But the pictures of Yaya and James from NY's trip to Hong Kong promise a visually stunning on-screen couple.

x.ATKD.x said:
I'm genuinely really looking forward to this pairing, just wondering how is No Problem as a production house ? Are they one of the better ones Channel 3 has ?.
Click to expand...

They messed up Leh Lub Salub Rang so I'm a bit sceptical about them handling this lakorn :/ Hopefully they can change my mind. I'm low-key still annoyed about LLSR cuz it had the potential to be better than it was

YadechTaemint said:
They messed up Leh Lub Salub Rang so I'm a bit sceptical about them handling this lakorn :/ Hopefully they can change my mind. I'm low-key still annoyed about LLSR cuz it had the potential to be better than it was
Click to expand...

I was really looking forward to LLSR (I liked the premise) but haven't gotten to watching it yet since the reviews for it weren't that great (& I don't want to go into it with that in mind, so I'll wait a bit).

The thing with No Problem is LLSR & now reading the synopsis for this drama is they do have good ideas (or ones that I like) but the execution really needs working on, hopefully they'll learn from their past mistakes and improve with this one. I'd prefer they didn't stuff this one up since it'll be the first time we see Yaya & James together (No way will it be the last lol. I'm expecting Ann to work with them too in the future, I'd be surprised if she doesn't).

Many people especially Yaya's fans are not happy that Khum Mam of No Problem cast her again.

Duang Jai Akkannee was done by No Problem, right. DJA was good, but yes in general, they've struggled with strong plotline follow through.

But fresh pairing is great!

Well the summary sounds bad but some fans say the novel is good and that it'll be a challenging role for Yaya so there's that.

Also No Problem and P'Mam deserves some credit. Yeah maybe they messed up LLSR but they've done some good stuff too. No company makes hits 100% of the time. You gotta give them credit for DJA Nadech/Yaya, Bella/James 1st one, and they've done a lot of Anne's hit lakorns in the past. Manee Yard Fah, Jao Sao Prissana, Song Naree, etc.
S

I'm worried about No Problem too frankly but I will try to stay optimistic without expecting much. I liked DJA and NNS (James Ji and Yaya) but I didn't like TNKK and I was furious with LLSR. Fans are saying that the story is really good but I'm worried about the execution. LLSR had good synopsis and so much potential yet it didnt translate into the screen and the lakorn made no sense. I'm gonna try to keep my expectations low but I still look forward to seeing Yaya with James Ma.

Character of Yaya, she must take a role of 4 character

First life, she play as twin sister. Older name as Kasalong, was raised by her mother. She is sweet and gentle, good at north dancing and household. Having good acting, everyone compare her to be gold. Younger name as Songpeep, was raised by her father, is cruel and selfish like her father, always jealous of Kasalong. She think that her mother love Kasalong more than her. She like to make up story, and seduce any guy, then they will fight with each other for her. Like dressing and such a rude. People compare her to be a shit. Both of them are tragically die. Songpeep die in fire with her anger, Kasalong was trapped, die from malnutrition

Second life Songpeep was reborn as Pimpisa, daughter of wealthy doctor, is confident woman. She is different mood when she is in good or bad mood, like to let people calling her as Prompee. She is self-welled, but can stand her fiance, although she can't know why he doesn't get marriage with her. Kasalong is spirit, need to lead actor and Pimpisa remember a past life. She bring Pimpisa's spirit to Kasalong body in past life, to let her know about everything. How Kasalong was harmed until she die, and let Pimpisa know that mother love her

Third life Kasalong was reborn as Pimmada, daughter of Pimpisa, just graduated, is clever, cheeky and casual. She will be bad to people who is bad to her, never accept love from anyone, like she wait for someone

That's a lot of lifetimes. Don't get me wrong, but I'm always so iffy with these many life time Lakorns. 2 is usually okay for me but 3? Its a lot to execute and make sense of but if it works it works. I still have a little faith in P'Mam. Her Lakorns are either hit or miss for me. I love James Ma and am eager to watch this for him. Yaya is an actor I keep on my radar. I don't get excited when she has a Lakorn but if its my cup of tea and she's in it, I wouldn't mind. I think James and Yaya will do great. I just think this storyline is a little complex. Regardless, I'll still keep this on watch because I can't miss out on James!

The summary seems too complicated. It's something that would be rarely a first pick for me. But I'm going to hold judgment until it gets premiered. Which will probably be in...2019?

Tanya said:
The summary seems too complicated. It's something that would be rarely a first pick for me. But I'm going to hold judgment until it gets premiered. Which will probably be in...2019?
Click to expand...

The plot doesn't sound very clear & it seems like there is room for viewers to get confused. I loved loved loooved DJA TNNK was also a fave but NNS really dragged for me, in the last few episodes I only really carried on watching it for Yaya. I really couldn't get into James Ji's acting, I found it awks to watch.