Coming out from JinYong's 'Flying Fox of the Snowy Mountain', then running into GuLong's 'Rinsing Flowers and Purifying Swords', Gillian Chung, who includes beauty and martial arts in oneself, appears with her senior, Nicholas Tse, in a TV series for the first time.

In the series, Nicholas Tse, playing SanYe DaZhong, has great martial arts with a kind heart, but because of the orders of his master before his death, he went alone to search for a worthy sword. To fufill his master's wishes, DaZhong (Nicholas) was forced to kill the leader of San Dong, Bak Sam Hung. From that, he was being hunted down by the martial arts world.

Being injured on his way, he received the caring of Chu Yee (Gillian Chung). To protect Chu Yee (Gillian), DaZhong(Nicholas) accidentally killed Lee Zi Yuen. From their time together, a romance was born. However, because his master had told him not to reveal any of his feelings, the two of them have been left in the guessing stage. From the battle in Bak Wan Goon, Chu Yee (Gillian) had been hypnotized by her father, causing her to point a sword at DaZhong(Nicholas). Being devastated, Chu Yee(Gillian) has decided, in order to not hurt her loved one anymore, to leave. Perhaps it is fate, the two of them met up at a nunnery a while later. To let Chu Yee(Gillian) have a happy live, DaZhong(Nicholas) has decided to set everything down temporarily. Unfortunately, things worked out to be against what was wished for. After seeing her own father kill a nun, WaiKok, Chu Yee(Gillian) chose to go with DaZhong(Nicholas) to a sword pavilion, where a grand battle is about to take place . . .

Nicholas and Gillian will be portraying this romance of pain and hardships to project a romantic, heartbreaking, memorable feeling . . . but the ending is happy!

This will be Nicholas' third ancient drama. Although it is again GuLong's characters, SanYe DaZhong will be giving Nicholas an all-new image on-screen. Towards Gillian, 'Rinsing Flowers and Purifying Swords' will be her ultimate chance to make a new challenge in ancient dramas come true!
K

Another Nic series to wait on!!!!!!!!!!!!!!! I can't believe that they haven't even released DA REN WU and yet he's already making another one. What's with his hair? Not digging it, but still hot as ever! I have always wanted Nic and Gill to do a romantic series together and they're finally going to do one. I'm so happy.
They look wonderful together, so cute.
S

Ohh how cute i always wanted them to play a drama together and finally they did...can't wait to see this drama... they look cute together...Gillian is so Pretty!...and Nicholas is so FINE!!!
K

As a father-to-be, Nicholas Tse is currently concentrating on his work in Mo Shek. This will be the first time that he will collaborate with Gillian Chung as an on-screen couple in 30 episode series, "Rinsing Flowers and Purifying Swords".

It has been said that "Rinsing Flowers and Purifying Swords" has the highest production fees of all Mainland series this year. Just Nicholas' salary for filming the series is already 10, 000, 000HK$. When speaking of having to re-portray the famous production of Leslie Cheung's back in 1979, and if Nicholas feel any pressure, Nicholas frankly responded, "When Gor Gor (Leslie)'s version was airing back then, it is a pity that I was not even born yet. I had actually planned to search for that version and watch it before beginning to film, but now I'm really stuck. My only option right now is just to do my best; hopefully, I'll be able to bring the character out."

Although Gillian's salary is not as high as Nicholas', rumour has it that her daily salary for filming the series goes to six place values (millions). And as Gillian has had her 'lips sealed' and been forbidden to film intimate scenes ever since she came into the ET industry, this series is not an exception either. While she was filming a romance scene with Nicholas earlier, it had only consisted of embracing and leaning on each other, nothing extremely intimate at all. Also, Nicholas had planned to ask for a break during July-August to stay by Cecilia Cheung's side while she gives birth, but his management company had only been able to arrange for him to be working in Hong Kong at the time, making it easier for him to accompany his wife.

they look good together!
K 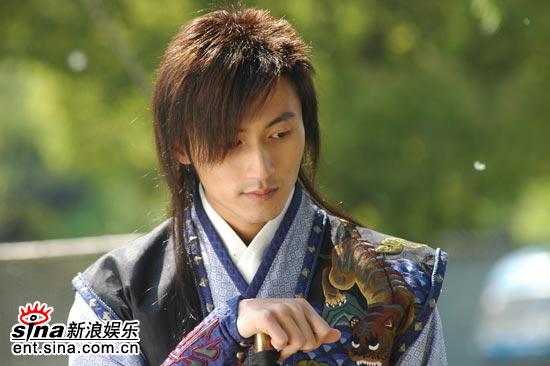 wow! another nic series...i can't wait to see this one either. love nic and gillian so will look forward hahahaha. they're will make a cute couple though.
P

i just start to watch it in cantonese and it's not bad...but i still prefer the old version that out in 1999 which is better.....this is a really good serie which is really short .
:yahoo: but that's nice to see Athena Chu (Yuan Zhi Yi) again in a serie :yahoo:
K

pleang sney said:
i just start to watch it in cantonese and it's not bad...but i still prefer the old version that out in 1999 which is better.....this is a really good serie which is really short .
:yahoo: but that's nice to see Athena Chu (Yuan Zhi Yi) again in a serie :yahoo:
Click to expand...

i think you've mistaken this series with some other series...because this series hasn't been release yet....they said it might be release at the end of this year...plus they haven't finish filming it yet...and i don't think Athena Chu is in this series too.....but i do hope they will air this series soon along with da ren wu.....
K

clips of filming the series