... for a a raw herring sushi with miso soup

When it's cold outside, there is nothing better than making a homemade Phô, served with a glass of dry cider please

p.s.
After boiling beef bones for like more than 2h... the soup is hella delicious... no need to add MSG

i always come back to this thread to check your creations. i love fish.

I am glad that my food pic makes you hungry hehe... sharing my love for Foods with our Asian Fusers a little bit more each time


Nameless said:
i always come back to this thread to check your creations. i love fish.
Click to expand...

I'm back, with little random pictures to share with our dear asian Fuseeeziez here ^_^ !!!

After finishing set up myself the small exhibition at 7am. I took this picture at the new Chao Anou Park (in front of you is Thailand)

Ant eggs.... it's been ages that i didn't eat them Hopefully i found it @ the fresh market, to cook myself @ home
It "sparkles" in your mouth... very delicious....

Have you seen this before ??? And guess what ??? it's edible.
It's very rare that you see it @ the market, and it seems that only the old ppl. know about this fruit.

In Lao it's called "Mak kham pae" ( or flat-tamarind, even though it's not really "flat").
It's not sweet or sour, nor taste like a tamarind.
it tastes like cotton type...(just very very little sweet).

Anan's Pilgrim...
Like every year, i like exploring a new place... This time, this place is called "Phrabat Aeo khann", it is located at the north of Vientiane (map here).
Once arrived there, you have walk & climb (5km or 3.11 miles) to the top of the mountain to see it (map here).

Come away with me and see by yourself with the small video below:

My souvenir from Phrabat Aeo Khann:

Spending time to chit-chat & laugh with my grandma before saying goodbye...

It took me less than 15sec to teach her the peace out sign hihi.... It was funny.

At Udon Thani airport, a rare buffet restaurant that doesn't use MSG. Only 5$US.

Phuket was hit by the Tsunami in Dec. 2004, and the Patong beach too, we were at the Patong resort, just 3min away from the beach by walk.

... at Phi phi island beach, I love swimming... with the fishes are eve better there lol....


... Back to my little home sweet home with the remaining foreign money (as usual)...

... and a little USB mouse from Air Asia (only 8$US), 'cos my previous mouse was broken.

with all these pics you posted.... i felt as if i've traveled with you hehe LOVE IT!!!

The famous & well known : the Buckingham Palace, everyone must know this place when they saw the prince William & Kate drove the car just married around this place lol....

Like W. Shakespeare said: "The World is your Oyster"

- The Oyster card: is an e-ticketing with microchip to travel within the greater London underground & rails... it's your key to travel everywhere in & around London.
It's the first thing that you must buy & top up once arrived there.

My moment of laziness & peace: Laying on the grass, read a book @ St James Park (next to the Buckingham palace)...

With a very good friend of mine who got married with an American from New-York, now they are in London.
She is an excellent cook.

Another popular monument in London: the Tower Bridge

The Queen Mary's Garden (Regent's Park) : it's my favourite park in London with full of hundreds of different kind of Roses !!!

If you love Roses & flowers, you have to come visit this place

Two little Angels trying to catch a pigeon in the park !!! lol,,, that's so funny & cute

Our coach inside the Eurotunnel Shuttle : it's the largest railway wagons in the world with the Channel Tunnel !!!!
It takes only 35-40min to reach France !


Tips & Suggestions if someday you want to visit London:

1/ Once arrived @ London, go & buy an Oyster card, top up with 20 pounds on it. When you leave, u still can have the refund for the unused credits

2/ To exchange your US dollars or Euro to British pound, avoid the "official" & popular Bureau de Change brands, simply go to the chinese bureau de change in China town, they will offer u the best RATE !!!
Ex:
for 100 euro = u got usually around 60 pounds in classic Exchange bureau, but in the China town: u can have up to 80 pounds !

3/ The Cheapest way to go visit London from Paris, is by coach(see picture above) ! it costs only 90 euro (100 $) for a round trip ticket !
It's a night trip, you leave Paris at 11pm then arrived to London at 5am.(local time) and similar the same for the return.

5/ Try the "Peking Duck" in the China Town !!!!
Long time ago, someone (i don't remember who exactely) told me that you have to try the Peking Duck in London.
When I took my family relative from Australia to try that, it seems to be TRUE !!!
It's indeed very delicious !!! Very Crispy & Juicyyyy....

My new subjects of experimentation: 2 soles

This fish is sooO tender, yummy and tasty !!!
No wonder why I saw old ppl. bought them a lot...


Karting with my Consulting team...

Went to Munich for a meeting with my client last Friday, I decided to stay 1 more day to visit this city....

The "Wiener Schnitzel" for dinner... lol

The downtown by night...

I feel like i saw this place somewhere before... maybe in a Thai lakorn ???

A hopeless romantic guy.... at the freshmarket called Viktualienmarkt

My light lunch with a good beer before continuing my visit in Munich...

Beer is on every table !! haha... Just taking a little picture around me during the lunch at the Viktualienmarkt...

The heart of Munich: the popular Marienplatz with their coucou-music clock (in green) !!!

Hey Anan. Haven't seen pictures in a while. I forgot that I envied your food and travels. Please update us!!

PhoneO_5 said:
Hey Anan. Haven't seen pictures in a while. I forgot that I envied your food and travels. Please update us!!
Click to expand...

I've been very busy with work.... sorry that i didn't update my little thread lol....
well, if you request, i will try to update more often then....

My favourite bridge... The Brooklyn bridge

My junkie food at Ellis Island....

The Wall street bull with my dad... lol

Morning running like a New Yorker along the East river...

... over the 2 bridges: Manhattan & Brooklyn... I highly recommend if you like running... 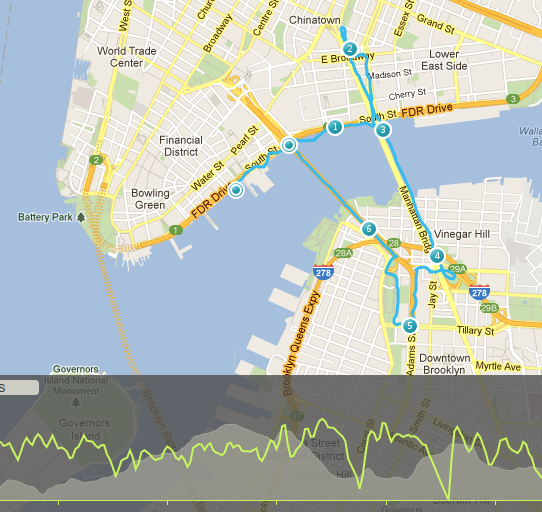 Very nice view from the top... below is the Chrysler building...

Last day at Central Park.... with my little Margie's bench

If you still didn't visit NYC, I highly recommend it...

I love the pic of your dad and the bull LOL!! I will visit NY one day, can't afford it right now

PhoneO_5 said:
I love the pic of your dad and the bull LOL!! I will visit NY one day, can't afford it right now
Click to expand...

LOL,,, thanks...
You definitely should go visit it some day !!!
I felt so bankrupt after that trip LOL.... the hotels are quite expensive... I think the next time that I'll go,I will chose the hotels around... maybe in New Jersey or... from the Brooklyn side.

My big sin in Sept: Crispy pork in the oven

Made raw Lap for my dad.

Another good purpose of the monk's saffron robe !! (at Wat Simuang)

i cant believe how its been. sole fish... This is my first time hearing about the fish. interesting!