Yeahhh, no more competition from CH7 Weir and Min lakorn!

WM lakorn had ended on Monday and the rating for BH picked up on Tuesday.
CH3 viewers in Bangkok stayed the same, but CH7 viewers in Rural and Urban have gone up.

It also helps that BH is reaching the climax and will end soon so more people will tune in.

Congrats to CH3 and BH team! 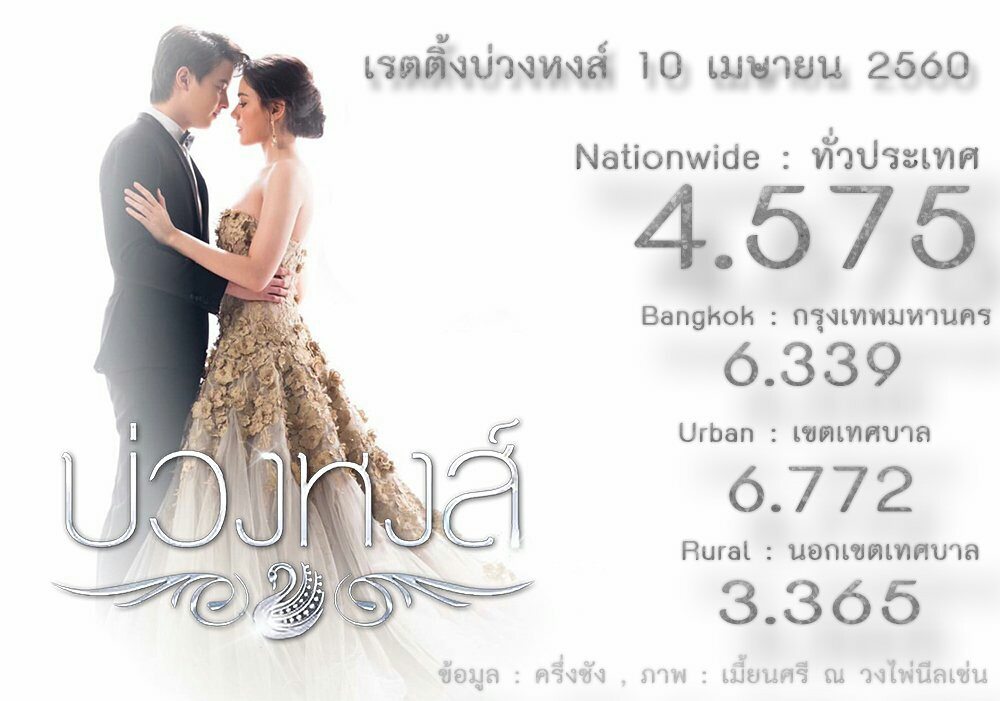 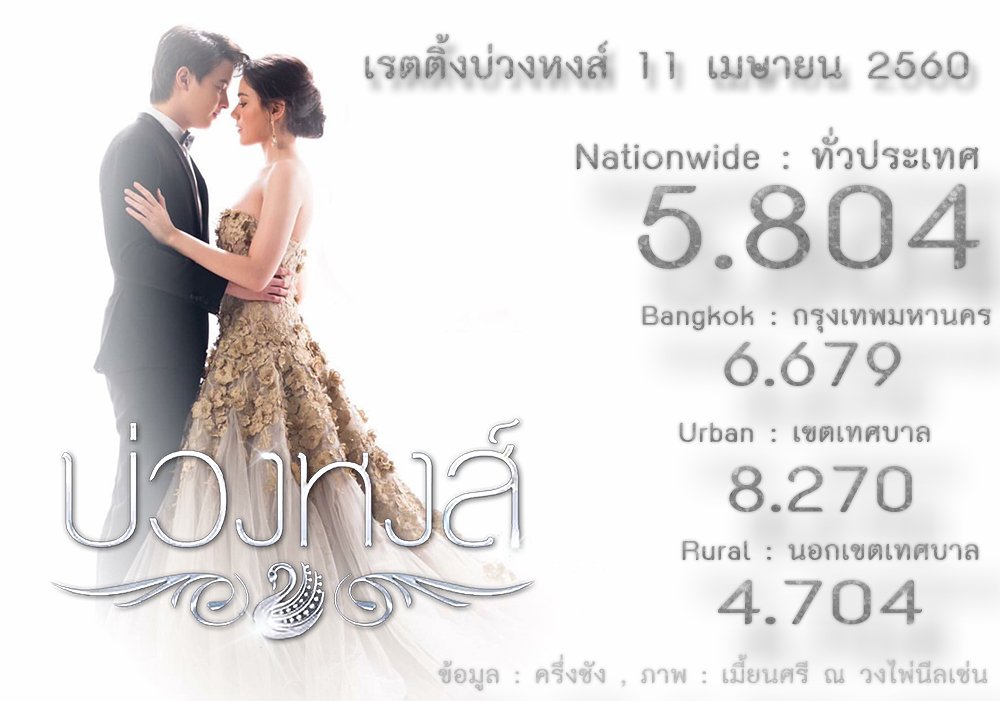 ❤All that you are is all that I'll ever need❤

Thank you for all the updates girls! Glad to see the rating is going up. I read somewhere that the rating was low because James Ji and Kim isn't doing a good job in theirs role lol! I mean if that what you think...

Anyways I love how this lakorn is not dragging as everything is up to it's game. Unlike other lakorn it's drags and a lot of BS are added while this lakorn is nothing like that as it focus on the plot of the whole lakorn/story lines.

I'm glad that everyone is giving Pim a second chance. I really love Kan and Pim relationship, a true friendship. Jin on the other hand, I was really annoyed with her talk but after Pim saving her from that white guy she become nice to Pim and treat her nice. Kim speak English really well! Thumps up for my girl! Chumita (if that even who you spelled her name) gosh she is so annoyed!

Chat and Pim friendship is also cute. Ramet on the other hand, dam he need to take some lesson from Nai Singh lol! James Ji English need more work but hands up for the effort. The voice of Nadech got me LOL so bad! Vi is such a b***h and dam can someone ran her over!

Haven't seem this week episodes as i like to enjoys it on Friday night lol! Reading from the other members, Ramet and Vi is getting on their nerds lol! Ramet is all about business but what happen to that Ramet about protecting his employees? I hate Vi and her gay buddies.
T

yeah we need satit to choke that witch , jee didn't deserve that

Arghh the frustration is too real while watching epi 8. Characterization of hero is very shallow,most unlikable for me.Also I guess bcoz James acting is under standard it lacks passion and intensity, he can't portray fierceness properly,he is good at smiling through eyes.On the other hand, kim elevates her scenes to next level.You can feel her emotions.
On second thought I feel Ramet looks good with vi,they both deserve each other.
Haha,whom am I kidding toI am just talking in a heat of moment. But,Ramet needs to have major regret for his actions just like pim is contemplating and paying for her actions.

the english subs doesn't cure my anger against Ramet. he's still a jerk. he doesn't know how to handle his love. he thinks he is teaching her life lessons and the way he does it most of the time sucks. Pim changing is mostly due to people around her who support her and are always around to give meaning to things. not him.he should be grateful that Pim is as strong as they come and can handle his suffocating character. i hope she disappears for minimum of 2 yeas and he can't find her for a while.
S

I wish a kind soul will spoil me and tell me what will finally make Pim leave and if it will happen next week. i can't wait for her to leave at this point. thanks

spicynoodles85 said:
I wish a kind soul will spoil me and tell me what will finally make Pim leave and if it will happen next week. i can't wait for her to leave at this point. thanks
Click to expand...

I post the answer in a spoiler form a few page back!

Even though I try so hard to give Ramet another chance, I'm still wonder what did he do and why he always told others that everything he did is for Pim good sake! Until now what have he done? NOTHING!!!!!! What right does he has to change Pim? Are you her dad? I'm a little confused!

I really love how Pim defends herself that even if she made a mistake before, even if she lied to him one, even she owe him money and trust, she is still her own self! Ramet is just too strict toward her! I know that he doesn't want Pim to do a job with high pay because he basically doesn't want her to pay the debt too soon and left him! But he act like she is his slave!

Okay another scene that pissed me off is the CCTV scene! Isn't Ramet told the idiot foreigner that there are more than 5 CCTV in jaravee restaurant? How come they can only find one clip and that clip doesn't help at all because the camera is behind Matavy back so they can't see it clear! It's so frustrated!

Based on clip post by fan in YouTube, seem like the two gay guys will join team Pim and fight back this evil Vy! I'm so glad they change it from the old version! Matavy deserve to be fail and lonely for the rest of her life!

i completed ep 8 yesterday with sub but couldn't share the gifs i did and my thoughts but basically i agree with you ladies , ramet is acting so goody like he is doing the right thing for pim and he teaching her a lesson and watn her to improve while all he is doing is hurting her over and over again he didn't told her one single word to encourage her, and as @MomRamy said pim is so strong she admit her fault she know her wrong and she accepted the punishment with dignity and with the help of her new teammate she discovered herself more she had the strength and the support to overcome her clumsiness but ramet is still stuck at the same place keep reminding her how she lied to him keep judging her on that one mistake that he knew she did it out of deceive and because she was in need of money he knew how she was but he is not welling to show care he is laying a childish game with her he is no longer manly for me cause he is really too much

gosh!!just watch ep8 with sub and now i piss at ramet over and over.he still threatening pim to send her to jail.i don't know why this guy keep on repeating the same word.lucky him at least he alter some words but still with the same threat.if he saying the same word and same sentence then i really want to kick him..LOLS.ramet sure get on my nerve.

yeah right what a great protection <_<, and my beautiful pim with her sweet innocent eyes was eager for hi to say "yes i care about you"

and after understand the situation(thx to subbers), i really feel bad for pim.she right now just willing to receive punishment really make me want to cry.our swan become so soft-hearted.i'm glad at least she still the strong woman to keep her pride from being stomp down by mathavi.

a guy who can't forgive is not a worth guy to me so better i see ramet forgive pim and start to show care to her next epsiode or i'm gonna still hate him right now cause it just annoying , you man she got it already like isn't it enough what she had to get through she is passing her punishment stop bringing it up over and over again non stop , does he really can't see pim improved and changed everyone can see that

i'm in love with pim's charcater sooooooo strong a woman should never lose her dignity no matter what happen to her , the way she truned to her like she is getting ready to receive the fire

and it's not true pim was polite as much as she can with that snake is already good that she didn't adress her with a bad word she really maintain herself so well , he is the one who should to behave himself better

he should say this to Vi who kept get involng with pim and keep asking her personal question from the first minute she saw not come to pim who did nothing to tell her this , he really piss me off

this is making me bipolar too i want to see the sweet ramet and pim back but when i remember what he is doing to her right now i say maybe not , this is what happen when we love someone who we have encounter hurtful moment with the bitter swet moment i feel watching this

i want to shoot that witch